Green truck is my '66 F-100.  It has been sitting in the garage mostly disassembled for about 3 years now.  I took it apart because the front cab mounts had rusted to the point where the cab had sagged enough to cause a bind in the steering column.  The next step on it is to obtain the parts to install disk brakes on the front and begin body work using sheet metal I got from Arizona.  The cobra's 390 will ultimately go in Green Truck.

Here is the current state of the truck.  I have been stripping the doors getting ready to have them sand blasted. 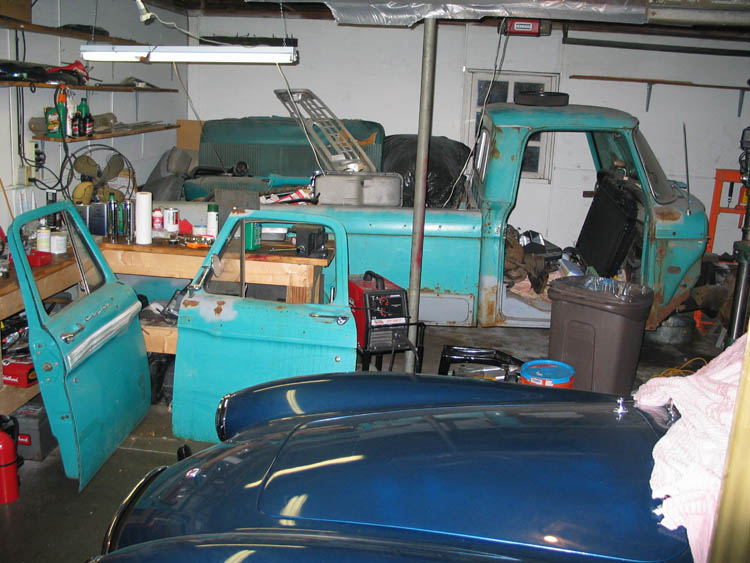 Today I finished removing everything from the cab and lifted it off the frame.   I need to fix a few more rust spots on the cab and sand blast it.  I think I'm going to figure out a way to haul the cab into the back yard so the neighbors aren't offended.  It's progress anyway, even if it's just taking apart progress. 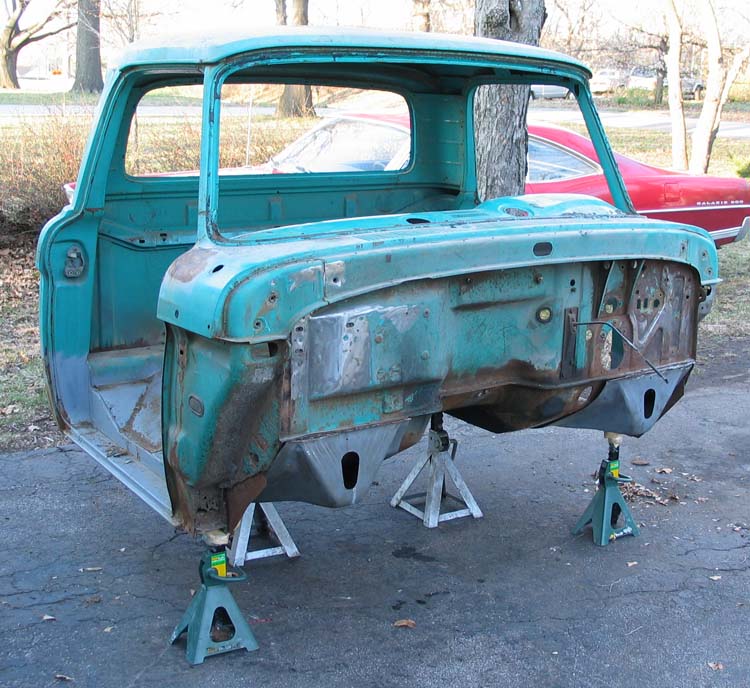 The project got escalated considerably yesterday when we decided to buy a '73 parts truck from a local expert on '61 - '66 Ford Pickups.   After drooling over our new friend Jim's collection he let us borrow his trailer to bring the brown beauty home.  The plan is to, as quickly as possible, strip it of all useful pieces and cut the rest into small pieces to sell for steel scrap.  If that project is successful we may do the same to a frame donor for Red Car.   The useful pieces of brown truck include:

After we got it home we began stripping it down on the driveway.  The plan is to remove the engine and trans there then roll the rest into the back yard to continue the dissection in privately.  It would be nice to sell some parts off this truck but there doesn't seem to be much demand for this year, I'll have to do some research to see what if anything people are looking for.

Today we took the trailer back and kept going on the disassembly.  It went pretty well I think, I used an impact wrench where possible and that really sped up production.  I should be able to pull the engine and transmission tomorrow night.  The front clip is really pretty nice, I may try to sell it. 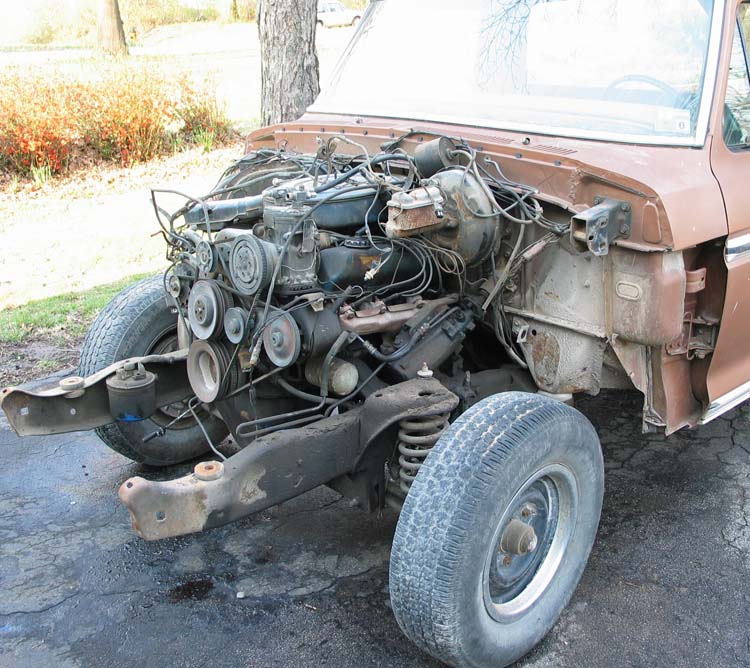 Last night I got the engine / trans pulled and stowed temporarily in the garage.   Duncan and I also pushed the rest of the truck (it's much lighter now) into the back yard for less flagrant neighborhood rule breaking.  I also made a big decision regarding the project.  I'm going back to the original plan of using the cobra's 390 and the original 3spd manual transmission.  The '73 engine and transmission will be sold either locally or on ebay.  The motivation being:

I'm starting to hate "Brownie".  Nothing is ever easy with that truck.  It's not fun to work on "Brownie".  Maybe it's because we aren't restoring it, making it better?   It's destined for the shredder and maybe it knows it.  Luckily there isn't much left of it.  Today I took the box off and cut it into 3 pieces with the sawsall lengthwise.  Next I need to get the tanks drained and out of there.  The end is in sight! 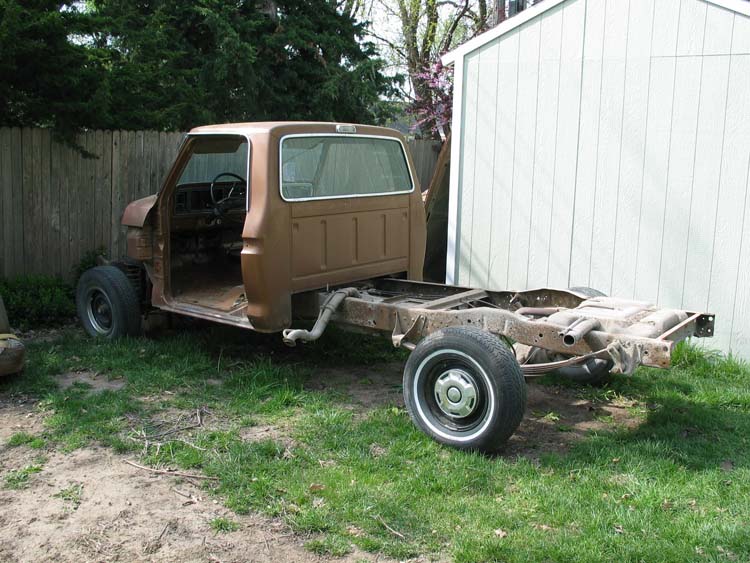 As you can see Brownie continues to shrink.  Since the last installment:

I have been hindered because my sawsall broke.  It should be back this week and I can continue cutting things up.  Then it's off to the shredder (and probably China).

A bit more work done on brownie this week.  The power steering box and column have been harvested, along with the brake booster and master cylinder, and all the airconditioning stuff.  All that really remains to take off is the proportioning valve and brake lines.   I still haven't gotten my sawsall back from the DeWalt repair center, otherwise I'd be making little pieces of it.

Well after having it for 5 weeks, the DeWalt service center finally finished repairing my reciprocating saw.  I got it back and over the last two nights I finished cutting up old Brownie.  I plan to haul him off on a flatbed trailer to be shredded sometime next week.  I cut out the whole firewall and saved it for reference when I try to put the in dash air conditioning in green truck.  It was really surprisingly easy to cut up the frame etc.  I only used up a half dozen blades. 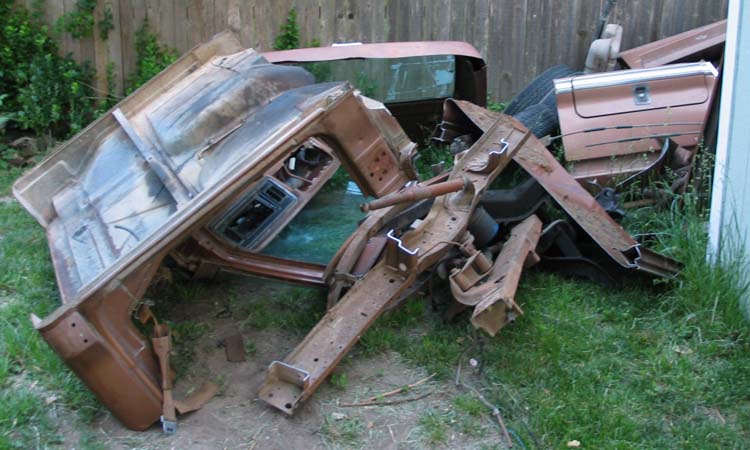 Brownie is gone.  By now he's probably shredded into a million pieces.   We borrowed a 16' trailer from our neighbor Marty and it still took two loads because the sides of the trailer weren't very high.  At total of 2140# of steel and we left with about $42.  The first (biggest) load they unloaded with a magnet crane, the kids and Wendi loved that!  Sorry we should have taken pictures but we didn't.

I have been meaning to get organized to start working on the pickup again and I made some progress today.   Because of the cramped quarters in the garage I needed a way to pull the parts out I am working on and put them away easily.   I'd also like to get to the point where at least for some period of time I only have the frame in the garage.   That means I need a way to move the cab and box into the back yard for storage under a tarp.   Restoring the frame and updating the brakes seem like a good next step to me and a reasonable project for the winter.   So today I built a cart to hold the cab.   We went to Harbor Freight and bought 4 10" wheels (2 of them caster).   The cart frame was built out of wood because that seemed quicker and easier than building it out of steel, although it would have been valuable welding practice.   As you can see it worked out fine and I had a goofy helper. 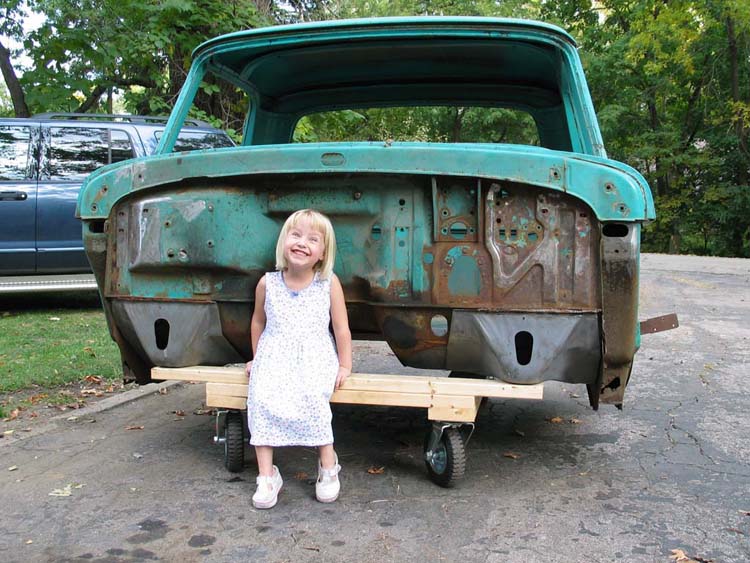 I just realized I hadn't updated this page in quite a while.  Since the last update, I have also removed the box, built a similar cart for it and stored it in the back yard behind the shed.  The frame and rear suspension is back in the shop and I am beginning to clean the frame to paint it with POR-15.   I remember the rear end had a pinion leak, so I will probably rebuild the pumpkin and maybe add an inexpensive locker of some kind.  I also have started prepping the front suspension parts for the same cleanup and POR-15 paint.  These are the parts from the '73 with disc brakes. 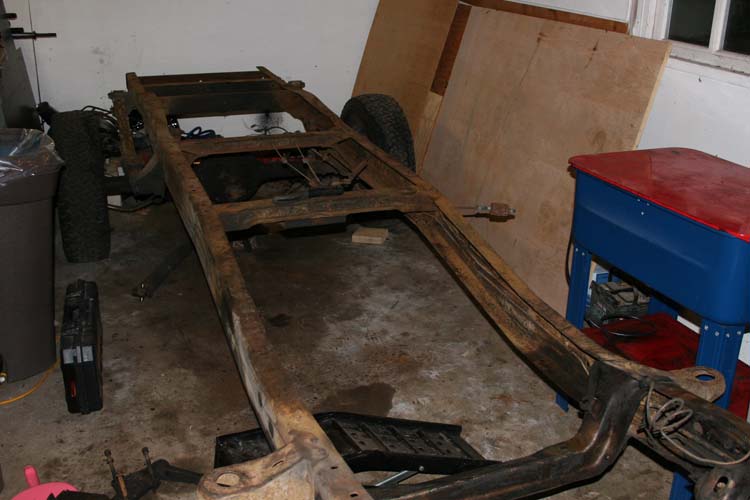